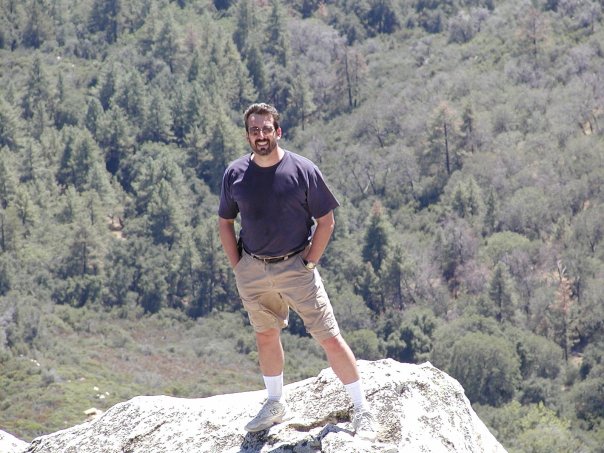 I had the exciting privilege of spending almost 20 years as a radio personality in San Diego California when being in broadcasting was exciting and fun.  It’s the one job that I really loved.  It was back when radio “DJs” were more than just liner card readers.  We were “personalities” back when radio was as much about entertaining people as it was about playing music.  That was during the last years of the heyday of radio.  It was one of the most exciting times of my life.

I had many memorable moments.  One of them was being the guy who played “We are the world” at 8:50AM on the morning of April 5, 1985 when over 8,000 radio stations played that song simultaneously around the world.  Another was standing on the docks in Long Beach California on Sunday, May 25, 1986 holding hands along with thousands of others to participate in “Hands Across America.”  Then, of course there is riding an elephant in a parade, taking contest winners back stage at concerts to meet the bands, and a thousand other things I probably don’t remember.

As you might imagine, radio personalities bounce around a bit in that business.  As I bounced around I was blessed to work at some great radio stations.  Here’s a short list:

You can listen to samples of my old radio shows here. 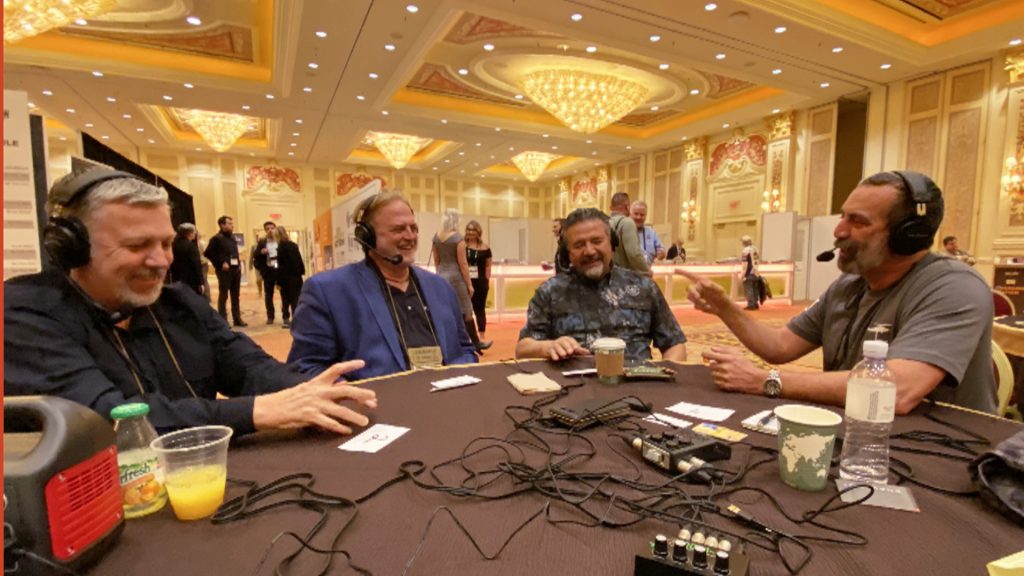 Some time back I launched the GunGuyTV Firearms Podcast as an extension of the GunGuyTV video program on YouTube and other video platforms.  Since that time, the audio podcast has grown exponentially.  It is now syndicated on such key podcast platforms as iHeartRadio, Apple Podcasts, Google Podcasts, Spotify, Amazon Music, Stitcher, Podbean and many more.

During my tenure at KSON, I moon-lighted for two years as an audio mastering engineer at Peter Productions in San Diego California.  We developed automated radio formats for syndicated radio stations nationwide.  That was long before computers and editing software.  Back then, audio was recorded on reel-to-reel tape machines.  We used razor blades and editing tape to manually cut and edit audio tracks.  It was a tedious and precise process, but I loved it. 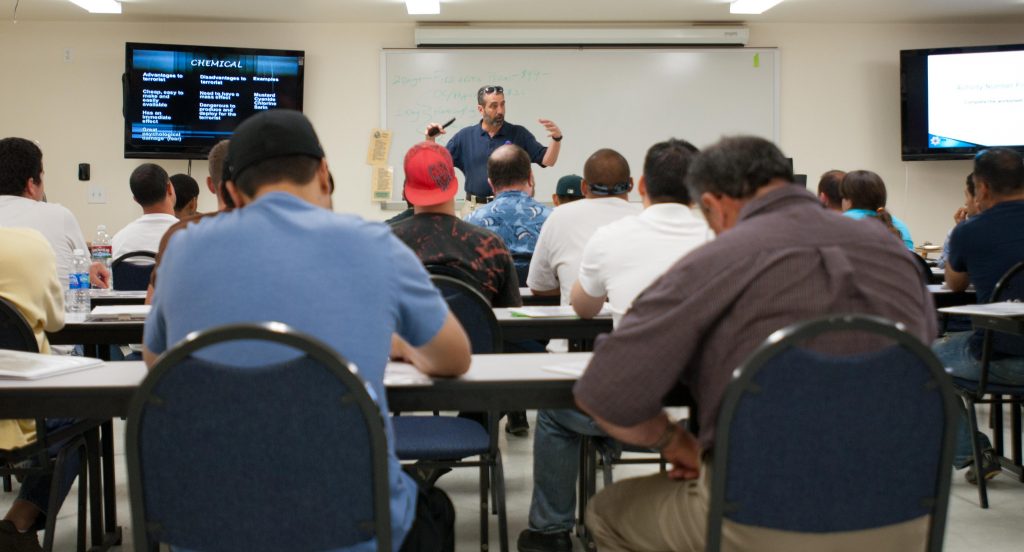 In addition to teaching, a major part of my contribution to the company is producing and narrating online licensing courses.  Rather than providing students with online documents to read, I develop fully narrated pre-licensing and continuing education courses for security officers in the state of California. That approach has been so successful that we discontinued live courses and migrated everything to our online learning system in 2019. I’ve been involved in many businesses over the years, and I have been interviewed by television news agencies many times as a result.  If you click here, you can check out my interview with Inman News about the marketing methods we used at a real estate brokerage my wife and I owned some years back. There is also an interview I did with NBC San Diego when we first started Practical Defense Systems.

In 2015 we decided to put my television experience to good use as the host and producer of GunGuyTV on YouTube.  From it’s humble beginnings, GunGuyTV has grown into a popular video program promoting the responsible use of firearms and the second amendment rights of law abiding Americans.  GunGuyTV is now available on YouTube, Vimeo, Rumble, The Utah Gun Exchange, BitChute, GunStreamer, and Odysee with over 212,000 subscribers and more than 25 million views combined.

I’ve published articles and columns on a variety of subjects over the years. Most recently, I’ve written a host of articles centered around shooting, hunting and the 2nd Amendment to the Constitution.  Those articles can be found on my blog at GunGuy.TV.  Still, that is not the limit of my writing experience.  Over a 4 year period I penned a weekly real estate column for a local newspaper entitle, “Your Real Estate Dude,” in which I kept readers abreast of changes in the real estate market and offered advice to buyers, sellers and investors.  The newspaper has changed ownership since then, but the articles I wrote can still be seen here.  Still another example of my writing can be found as a result of my Christian walk. As a Christian, I have often written about my experiences as I discover the will and workings of God in my life.  Those articles can be found on a blog entitled, “The Spirit’s Voice.” 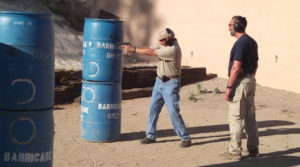 I was blessed to have a father who taught me how to do things.  He was, among other things, a Deputy Sheriff and an avid outdoors-man.  My dad loved to camp, hunt, and shoot.  He taught me how to shoot when I was five years old.  I’ve loved shooting ever since.  In fact, shooting, hunting, camping and outdoor activities have been a mainstay of my existence since childhood.

About twenty years ago, I noticed that more and more people started asking me to teach them how to shoot.  I never thought of myself as a particularly outstanding shot, but others seemed to be impressed with my ability to handle a gun, so I started teaching them.  Along the way I helped coach a competitive shotgun team, taught countless new shooters and trained more security and police officers than I can possibly count. All these years later I am still teaching and I’m still learning.  At present, I hold the following instructor and training credentials: 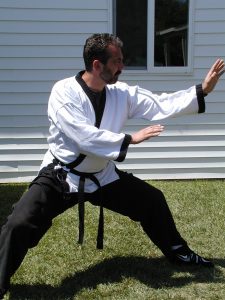 My son got me started in Martial arts.  I had always been interested in them.  One day Nick came home from school with a flier advertising “Karate” lessons.  He was just a little kid at the time.  He handed me the flier and asked, “You’re taking the class with me, right Dad?”  I was stuck.  We started studying Tang Soo Do the following week.  Almost seven years later we both took our black belt tests on the same day.  It was about 9 hours long.  It was a grueling experience, but I loved it.

While I continued to study Tang Soo Do, my wife got interested in Chen-style Taijiquan, which I still practice every day.  She came home from work with a flier from what turned out to be an outstanding school.  She handed me the flier and asked, “You’re taking the class with me, right sweetheart?”  Once again, I was stuck.  Some ten years later I was still studying Taijiquan under Shrfu Mike Patterson when I met my former business partner.  Unfortunately for me, Shrfu Patterson sold his school and moved to Las Vegas, Nevada.  He is still teaching.

My former business partner is a fellow named Mike Ritz.  Mike is a large 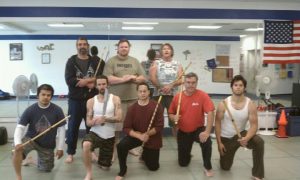 and heavy-set white guy of German heritage.  You can see him standing between Greg and me in the group photo.  He looks nothing like what you would expect a martial arts instructor to look like.  Still, Mike is the best FMA (Filipino Martial Arts) instructor I have ever met, and I’ve met a bunch of them.  Mike’s group is called Cannibal Combat.  I started 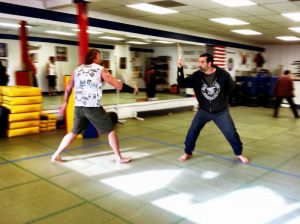 studying FMA with Mike in about 2006.  Several years later after a lot of fighting, training, bumps, bruises, and one surgery to repair a broken hand I was made a full instructor and awarded the rank of 5th degree black sash.  Mike’s ranking system comes from his Kenpo history.

As you can probably deduce from the picture of Greg and me sparring, Cannibal Combat is a full contact training group (no pads, thank you very much).  I’m a bit of an adrenaline junkie, so I loved it.  Unfortunately, age and injuries began to catch up with me.  I made the decision a few years ago to stop sparring with the group as a result.  In all honesty, I miss it.  What I don’t miss is the medical bills.  Even so, I still practice FMA every day along with a bit of Tang Soo Do to make it more interesting.  Martial arts are an important part of my life.  They always will be.

I should mention that Mike Ritz is still teaching and my son Nick is one of his students. 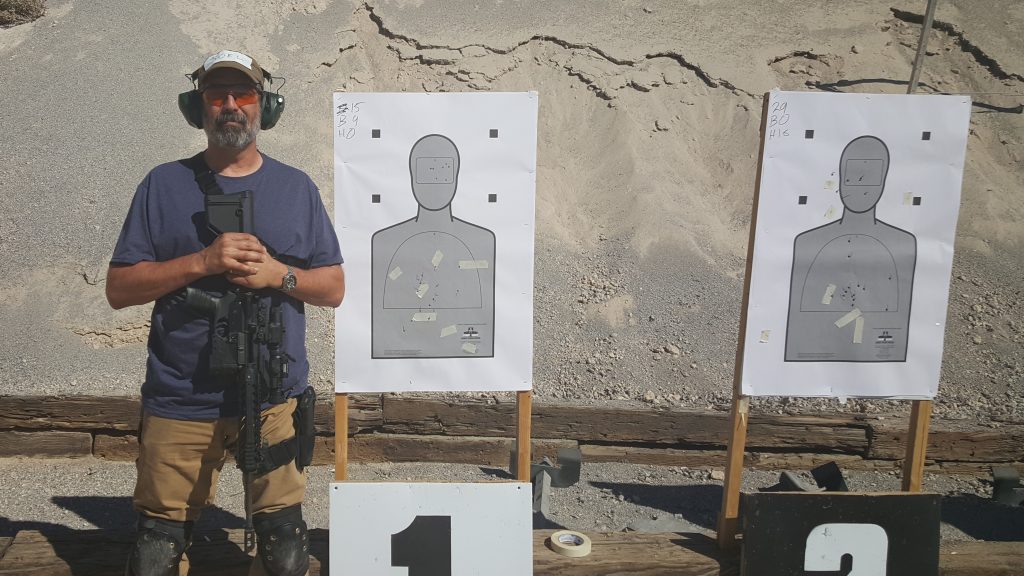 I have always had a protective streak in my character.  It’s no wonder that I’ve done so many things in and around the security industry.   Besides, when I left the broadcasting business I needed something to do for a living.  Along the way I have served in many roles including but not limited to the following:

I’ve received security training from the following organizations, in addition to others: 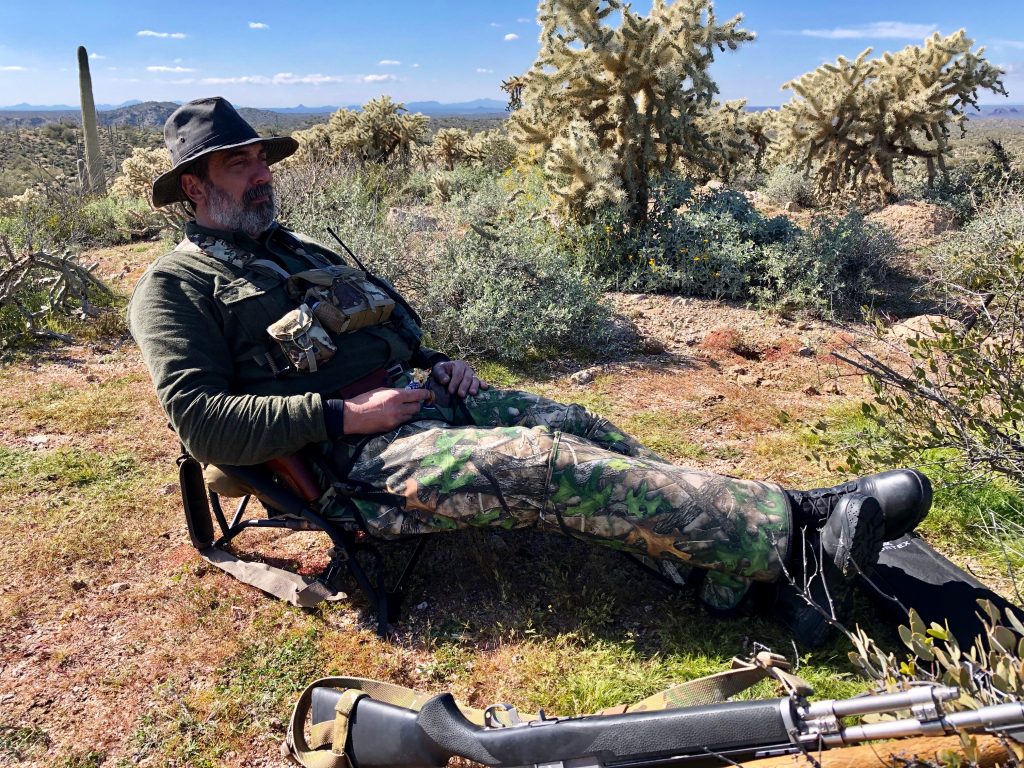 I’m a Christian, as are my wife and my children. I love to read my Bible and Christian books. I’ve been married to the same woman for a very long time and I love her more each day. Like my wife, our kids are precious to me. I look forward to time with them and being involved in their lives. When they were small, I used to read books and stories to my kids each night before they went to bed.  Basically, I guess you could say that I’m a God-fearing family man. 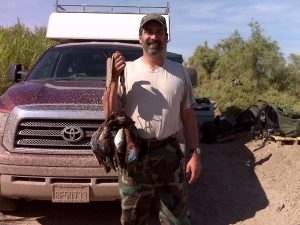 As a kid, I lived in the country. So, my hobbies tend to be of the outdoor variety.  I love to hike, camp, hunt, fish, explore trails in my 4×4 and go shooting, among other things.  As I mentioned above, my dad was a Deputy Sheriff in a rural county, so these pass-times came naturally to any kid who grew up in a similar way. With the outdoor lifestyle in mind, my wife and I bought a 40 acre ranch in the mountains of northern Arizona.  It’s our place to reset, recharge, and refocus.

I also love to go sailing, boating, ride wave runners and go to the beach. We live in San Diego, California part of the year, so we’re definitely in the right place for all of those things. Among my other interests are martial arts, HAM radio, photography, playing my guitar, anything that involves working with power tools, gardening, reading books about adventure and suspense, and a bunch of other similar things.